So yesterday’s mini-freak out turned into a full blown meltdown. Like leaving work early to fight off a panic attack, sobbing into GCB’s shoulder, unable to eat anything almost all day meltdown.

It was not fun.

The biggest and most heart-felt kudos to GCB in general for just how well he handled it by just letting me vent, letting me cry, hugging me, and telling me it was going to be ok. There wasn’t even a trace of that “holy shit, she’s crazy” in his eyes, just a steadiness that really helped calm me down. Good job, boyfriend, on the perfect reaction!

That being said, today was a better day. I suppose making it through a full day of work and actually being productive counts as better, but in general I FEEL better. I’m still a bit psyched out on the race bit, but there is quite literally nothing more I can do about it.

I cleaned. Oh fuck did I clean. Wiping off my window sills and vacuuming and windexing my bathroom mirror and doing every single bit of laundry I had and guaranteeing that the only dirty dish left in my apartment is the glass filled with milk that’s sitting in my fridge for GCB (who really, REALLY loves milk).

This is the same type thing I used to do in college before a huge test that would freak me out. I’d clean the entire apartment, whether I was the one who messed it up or not. My roommates loved that about me. It helps my brain to be calm when I’m in an organized space. So I cleaned. And then I set up little tiny piles of clothes for every single day starting tomorrow until I leave Chicago on Sunday. There are littler piles for the clothes I’ll be wearing for each leg of the Ragnar. Hell, there’s a pile of clothes sitting on top of my dresser for what I am going to wear tomorrow to work, as though I wouldn’t be able to just pull the stuff out of my dresser.

It’s funny. Piles of clean clothes and a running dishwasher and vacuum lines on my carpet have calmed me down more than nearly anything else.

All that’s left to do is….run. 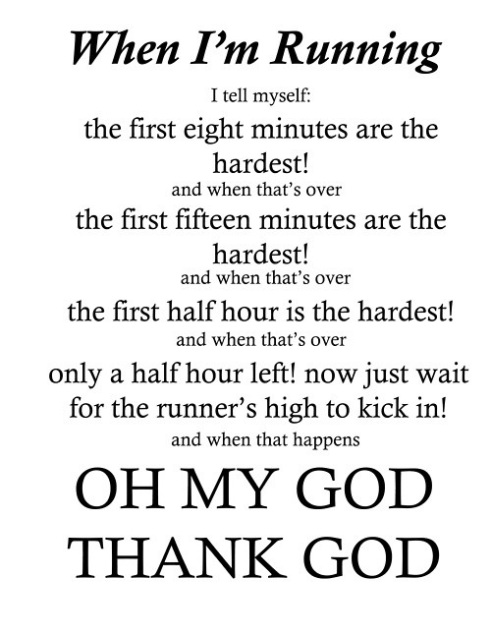