Day 4, I am thankful for my friends Stephanie and Sarah, the other two in my three amigos. Saturday morning I was starting to make waffles (after GCB had thrown a silly fit about having them RIGHTTHISVERYSECOND instead of later). I turned around at a noise to find my friend Stephanie, who lives in Denver, standing in my kitchen. There was much collusion and subterfuge (up to and including the aforementioned hissy fit) to get her here without me realizing it. She signed up for and ran the half marathon yesterday with me, and I got to spend all day with all three of these incredible people. It makes me feel beyond loved that this has been in the works since JUNE. I’m thrilled that I had a race buddy, and we were able to have probably one of the best (if one of the slower) races in recent memory. It was great to relive the night I actually met GCB (Steph was actually there that night), and it was all-in-all pretty phenomenal. Plus there was this picture, which makes me pretty happy.

Day 5, I am thankful to have made it to 28 years old. Granted, being 28 doesn’t feel any different than being 27 yesterday feels, but it’s been a pretty remarkable day. I took a day off work and have been able to lounge around my apartment with GCB just watching movies and spending time with one another. I’ve gotten tons of facebook and twitter comments, texts, emails, and it honestly makes me feel pretty fucking special to have such a remarkable group of people to call my friends. On top of that? I got new sparklies from GCB. See? 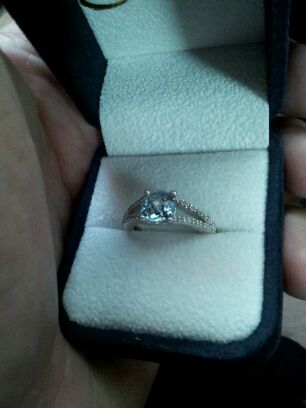 No, this is not an engagement ring, nor is it on my finger, as it is currently being re-sized, but I’m pretty pumped about it. I can’t wait to have it back.

Today has been a really, really good day. I have a feeling 28 is going to be the best age ever.