Today I hurt. All over. Abs, hips, quads. Even my triceps, which I learned when I brushed my teeth.

And? It was all so very worth it.

As much as I’d been worried about this race, given that it was an entirely unknown entity, PLUS the fact that I hadn’t really trained for it, it wasn’t nearly as difficult as I’d expected. Our whole team finished. Our whole team completed every obstacle.

There were some injuries, lots of scrapes, more bruises than we’re able to count, and mud in probably every single spot and more it could get.

No quit in here

We had to get ourselves over a wall just to get to the starting line.

The first obstacle we got to was called the Kiss of Mud.

We were the lucky ones who DIDN’T have a fire hose on us during this obstacle. Apparently later in the day they added water, since the mud was drying out, while Mudders were in there. Bullet dodged. 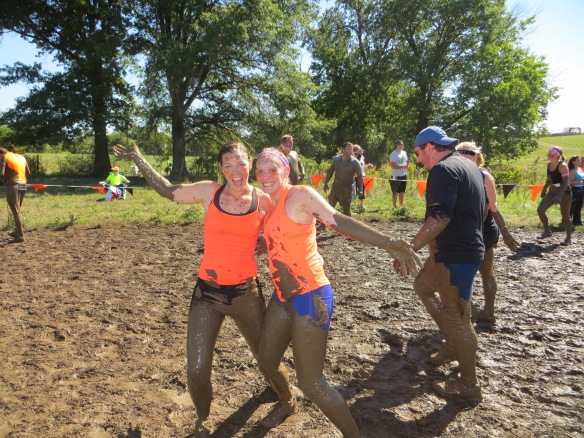 This is my aunt Melissa. She’s awesome.

Our next obstacle was a mystery obstacle, which involved climbing over a mud hill and jumping over fire into a pit, and then pulling ourselves out with a cargo net. 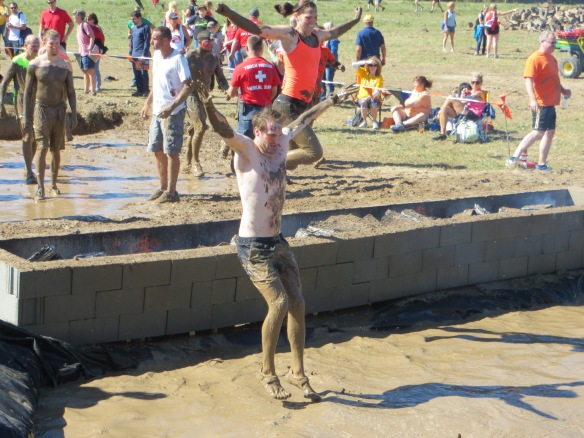 Once we were all nice and soaked, they sent us to the Glory Blades, where we had to get over two slanted walls to get over and the slide down the other side. Hey, teamwork, you come in handy!!

And then. Arctic Enema. I swear Tough Mudder was trying to mess with our heads as we ran for probably a mile with the side of the truck screaming “ARCTIC ENEMA” at us. We knew what was coming, and seriously, the anticipation didn’t help. 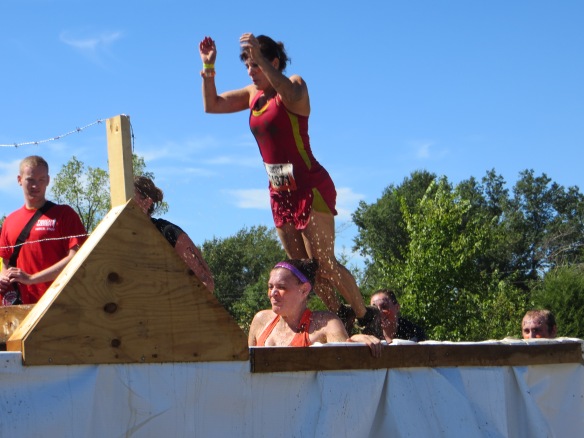 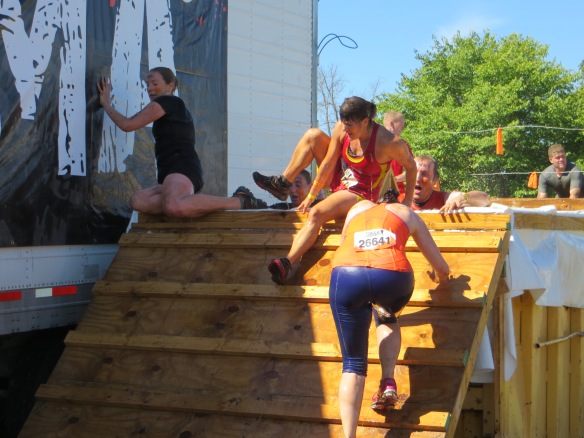 The many facial expressions in this one make me laugh

We ran around a quick corner and were quickly introduced to the Mud Mile.

Then it was off to the Lumberjacked obstacle. It’s surprisingly uneasy to get over giant logs when covered in water and mud.

Stuck. Couldn’t swing my legs up to pull myself over.

Then they sent us off to the King of the Hill, which was a tower of giant haystacks we had to get over. I think we can safely attribute most of the tiny scrapes on our legs from the hay.

Running up to the next obstacle, the Electric Eel, was more intimidating than going to the Arctic Enema. From about 100 meters away, all we could really hear were these screams of (what sounded like) sheer agony. Once we got there, we were accosted by the nearly continuous *pops* of electricity zapping the people in the event.

Right as I got into the beginning of the obstacle, they started pouring more water into it. Directly into my face, which successfully made me jump straight into the wires. I got hit a couple more times, once directly on my head which made me clench my teeth really hard. It was an entirely disorienting, and completely unlikable experience. 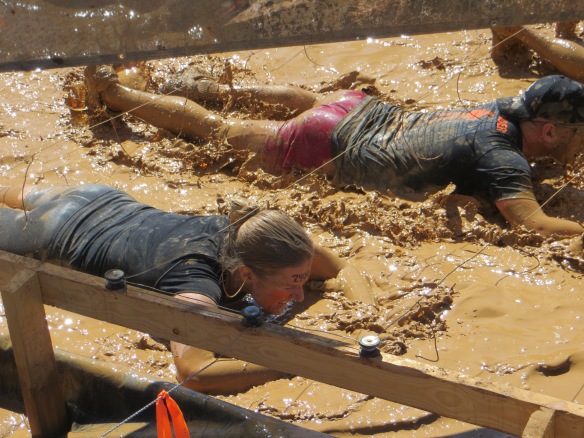 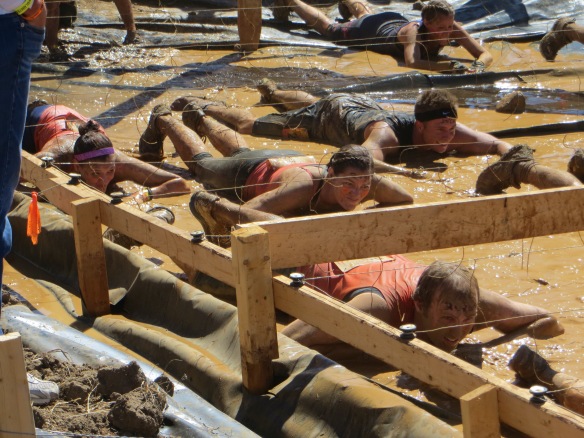 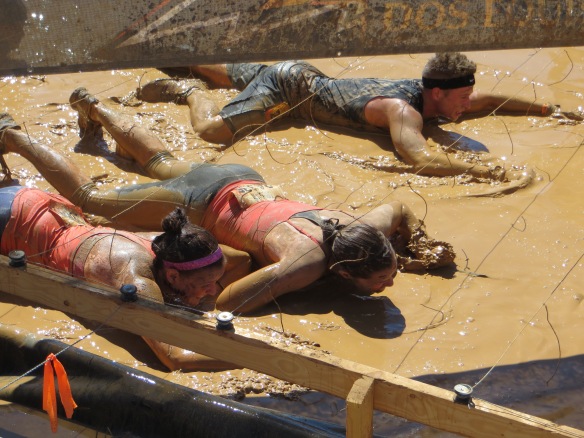 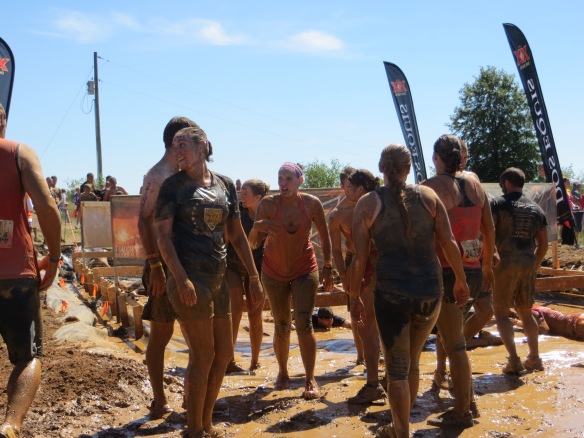 Following that, we ran a bunch and completed four more obstacles. I wish we had photographic evidence of my friend Kyle trying to carry GCB during the Warrior Carry. 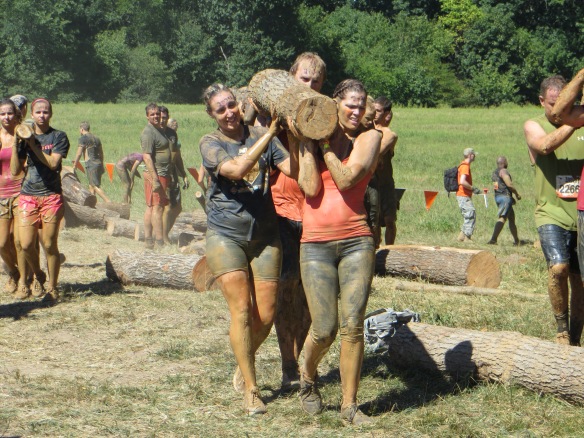 We got stopped for a while before we hit Mud Mile #2, but it was pretty worth it. This mud was awesome. 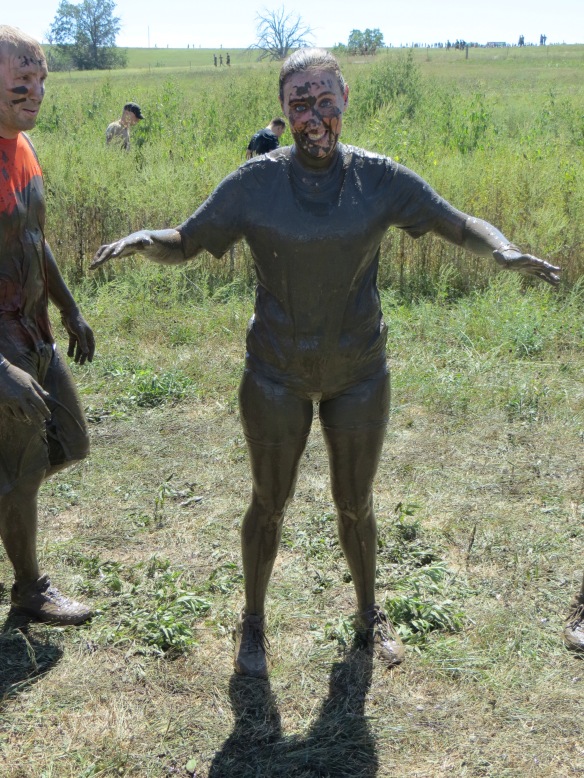 Over the Funky Monkey and through the Cage Crawl took us to the Berlin Walls. 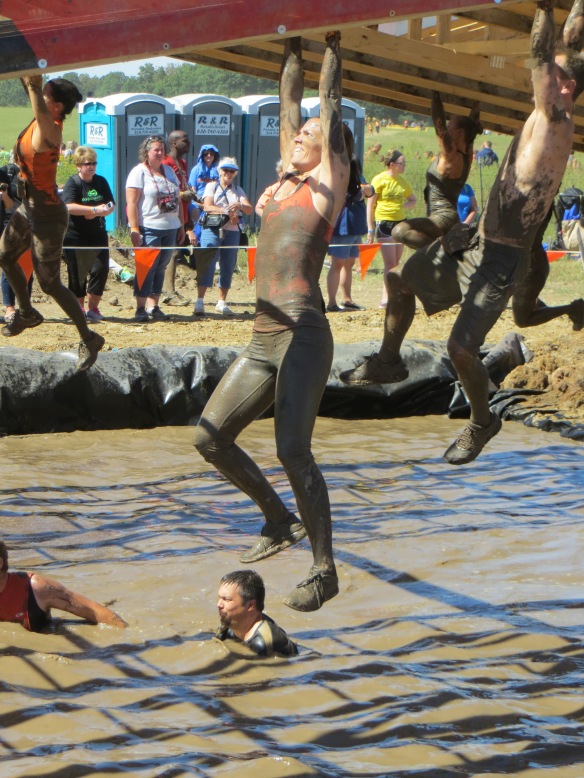 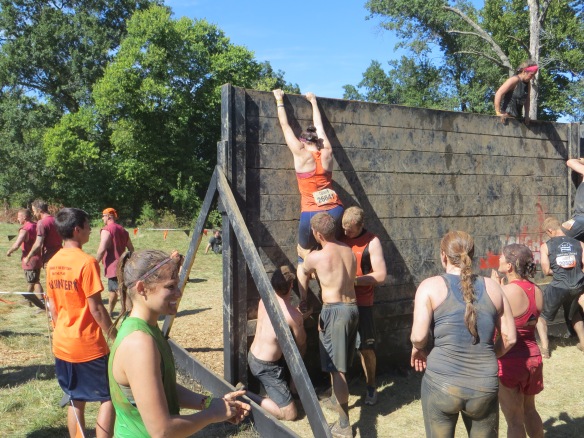 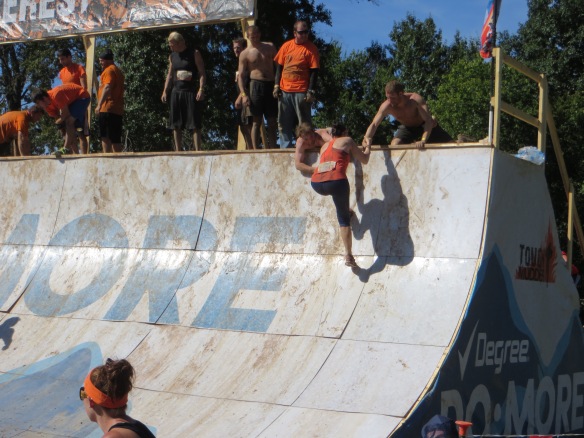 This is my second try. First try I just missed.

Climbing down from Everest we were looking straight down the chute to Electroshock Therapy. As of now, I don’t have pictures for it. All I know is that I was stupidly lucky to miss every single wire. My teammates weren’t as lucky, and some ended up nearly face-planting in the mud.

All that was left to do was get our head bands and our beers and breathe a sigh of relief.