Sometimes bad habits are really hard to break. Case in point, my bad habit of not training for races then going ahead and running them anyway. See: Disney Marathon, Tough Mudder.

I could sit here and tell you that I didn’t train for the marathon because I was burnt out and had been since Ragnar. I could tell you that I avoided running before the Tough Mudder because this summer was so damn hot I felt like I was melting just being outside.

I could tell you all of those things and more, but they’d all be excuses. Pathetic ones, at that. My tolerance for my own excuses is officially gone. My tolerance for where I’ve watched my body fall to is WAY gone.

A while ago I found a list of 100 reasons to work out. I honestly do love this list, but as should be expected, some of these stand out to me more than others.

2. Because it helps you get stronger. I know I’m stronger when I’m working out. That makes sense. And I know I’ve fallen off quite a bit from where I was, where I know I could and should be right now. Finishing Tough Mudder did help me to realize that maybe I’m not quite as far gone as I’ve been feeling, but it did remind me that I’ve got quite a ways I could go. I want to be stronger. I want to feel better physically.

A while back my dear friend Angela posted (either on her blog or her twitter, I don’t remember which) an article about strength exercises for runners. I have seen the benefits of nearly all of these exercises and yet haven’t incorporated enough of them into my workout routine in quite some time. Not going to Body Pump in the last six months has depleted the rest of them out of my regimen. So in order to keep getting stronger, I am adding this to every running day. I have learned that I like schedules and routines, and I would very much like to find myself in the routine of going running and then doing these exercises.

31. Because it helps you de-stress/32. Because it’s cheaper than therapy. Right now, emotionally, I am in an incredibly solid place. Even wedding planning isn’t stressful. However, I am not naive enough to think that there won’t be rough times. I am not inexperienced to the point of thinking that running doesn’t help me. On particularly stressful days, there is not much better than running out frustration and stress. I miss that.

33. Because you want a strong core. The reason I mention this one is because starting October 1, I am starting the Mean Abs Challenge all over again. Finishing the two minute plank on that final day was probably the most rewarding fitness thing I’ve done that didn’t result in a medal or a bright orange head band. So I’m doing it again.

52. Because you want to live longer. I know there are no guarantees in life, but if I can stick around here a little longer just because I ran rather than didn’t, I will do that. I want to be around for the people I care about, for the children I hope to have. Earlier this morning Janae at Hungry Runner Girl wrote about dedicating each mile of upcoming races. I have 19.3 miles worth of Disney races coming up in February. Actually, five months from today I’ll be flying home from that weekend. I have already started compiling a list of people to dedicate my miles to. I’m excited to write about those people in the coming months.

91. Because it improves your cholesterol. This goes back a little bit to wanting to live longer. Coming up in November I’ve got a fitness screen where I’ll actually get my cholesterol checked for the first time ever. I would like it to be in a good place. Working out helps that. So back to working out for me.

Because I can run and move and improve and enjoy life like the ceiling can’t hold me. 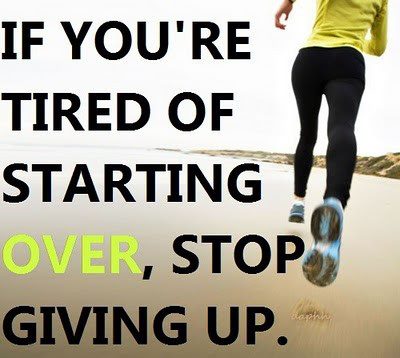 I don’t know if I’d so much call what I’ve done a giving up situation as I’d moved past something to train for, but I definitely stopped, and now I’m DEFINITELY starting over. And you know what? It hurts.

It hurts mentally because, well, shouldn’t this be easier? Ha.

It hurts physically because of course it does. Because on top of the Mean Abs Challenge from the other day, on top of building up my running, I’ve added the Iron Strength Workout.

Can I just say that it should be illegal to read other blogs and look at Pinterest and even talk to my aunt (seriously, Melissa, OUCH) for workout ideas? Not even joking. Iron Strength, Mean Abs, squat challenges, arm challenges, butt challenges, and I’m still at a point in my training that I’m going, “YAY PLEASE GIVE ME MORE!!!”

Masochism at its finest.

At times, at a lot of times, it would be so easy to go back to endless naps and Oreos and doing all of nothing, but to be perfectly honest, I cannot STAND what it has done to me physically.

I already knew I felt far from my best. I’m slower, weaker, my cardio capabilities aren’t where they could be, I just don’t feel good. I knew that, and it bothered me, even with a boyfriend telling me I am beautiful every day.

And then. Ugh. And then there was the trip to the doctor where I found out that not only do I feel less than stellar, I have actually gained ten pounds in the last few months and am officially the heaviest I have EVER been. On the same day that I moved my belt to the next loop out.

If anything will strengthen your resolve to keep at the whole working out/training thing, it’s seeing the scale past THAT number. You know, the personal arbitrary number that you are NOT ok surpassing. It’s different for everyone, obviously, and I’ve surpassed mine.

I’m not ok that I surpassed it. SO not ok.

And now it’s on me to fix it. So I’m fixing it. Getting back to where I am comfortable.

New motivation to eat better, to keep running, to get on the floor and do the sit-ups when my abs are already so on fire it’s difficult getting off the couch.

It’s going to be difficult. Of course it is. But then again.

Nothing in this world that’s worth having comes easy.

Get you someone who looks at you like Sloan looks at bananas.
Getting back into training the last month or so has been like coming home after a long trip. This park, these trails, these views, they're comforting in ways I didn't realize I missed, let alone how much. Good runs like today, or bad (*ahem*Sunday*), the park is always there, ready for you to keep coming back. Coming home. #forestparkforever
If you have to put in the miles anyway, might as well get a medal for it. #allstar5k #trainingdiary