The thing about birthdays, as I’ve said before, is that they give you bench marks on life. For example, twenty-two was a wonderful year, full of graduating and getting a job and buying a car and moving to St Louis.

Other years have had some absolute highs, 27 coming in very close to the top of the list. But nothing will compare to 29.

This year is going to be a phenomenal year.

A couple of weeks ago at work, I submitted the goals that I am working towards for this fiscal year. This was right around the time that Angela was posting her October goals wrap-up and listing her November goals (let’s be honest, we aren’t the Type A A-Team in our Disney races for nothing). In our emails surrounding both of her posts, we talked a lot about goals. Running goals, life goals, wedding goals (on my part), etc.

I’m not one to set New Year’s Resolutions. It seems to me that if you want to improve yourself, the time to start is now, not in a few months at some arbitrary point in the winter. Yet somehow, my birthday benchmarks always make me take note of some goals I’d made without consciously considering them.

I suppose this year is a combination of goals and a “pre-30 Bucket List.” And what better way to hold yourself accountable than writing them out for the entire interwebs to see.

1. Get through the wedding under budget. Wedding world is expensive. When we first started talking budget, we had a figure in mind that was almost immediately blown out of the water when we started looking at what we WANTED to do. When we found a place that would do everything and more that we were looking for, we bumped our budget up a little bit more. And then we sat down and had probably the most intense, down-to-the-penny type conversation I’ve ever had with another person. That figure (which is honestly nearly double what we originally set) is what I’d like to spend less than. Really. Granted, after going almost $300 over budget on my dress this past Saturday, it probably won’t be easy, but I think we can do it.

2. Find a pair of jeans that actually fits me. It’s interesting, this whole taking measurements for dresses thing. The size chart made me both chuckle and sigh, as my bust and waist size had me between two sizes, yet my hips had me between two different sizes that were a couple sizes bigger than the bust/waist sizes. Yay for being pear shaped. Later that day, I did actually find a pair of skinny jeans that mostly fit, yet I still spent part of the evening pulling them up. I want a pair of jeans that fits, that doesn’t have the gap in the back, that I won’t spend a full day pulling back up to where they belong.

3. Run a half marathon in under two hours. Over the last year or so, my focus has shifted away from running (clearly). I want to put it back. It is invigorating to run. I have missed it. And setting this goal (that is entirely doable, by the way) gives me something to focus on. Once the marathon was over, any and all focus on timed events went straight out the window. See: Tough Mudder, where the goal was to just finish the damn thing. Yesterday Danielle at T-Rex Runner posted about her absolutely incredible PR. I don’t even know her and was damn near cheering in my seat reading about it. A PR is satisfying on levels that are hard to describe. I never started running to race people. I actually hate racing people. But racing against my past self? That’s something I can get behind. I will cheer on ANYONE who’s going for  PR, and I’m still cheering for Danielle. My goal is to be able to cheer for myself come February, and as a pipe dream, again in April. 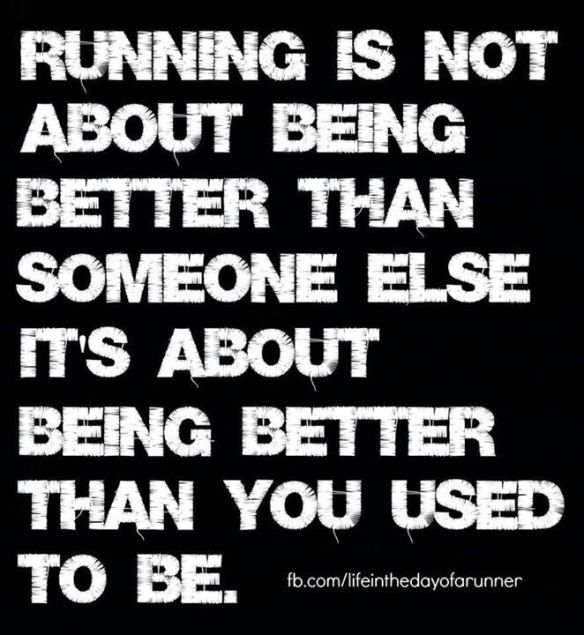 4. Run. In races and new events. For fun. For health. Just run. I feel like I’m well on my way here, as I’ve already scheduled a few new races coming up. I’ve got a 10k on Thanksgiving, a 15k in December, obviously my Glass Slipper Challenge in February, and I’ve signed up for a half marathon in April as well. And then? Then I shall do Ragnar Chicago again. I lovelovelove Ragnar, and reading Janae’s updates on Ragnar Vegas gave me some SERIOUS running jealousy. I suppose it was just really good timing then that last week I got an email about joining another Ragnar Chicago team. I am so excited!!

5. Be healthier. I was going to go into more detail here, but I won’t for a whole lot of reasons. Suffice it to say, I have health and fitness related goals that I’ll be working on this year, I just won’t be listing them out for the whole wide world.

6. Write more. This is one that I won’t put many specifications around. However, I do know that I like writing. I would like to do more of it. Whether or not it’s in this space remains to be seen.

7. Stay happy. The last year has been the happiest of my life. Things are in such a remarkably good place, and I would like to keep it that way. There are some big things and some not so big things to look forward to, but every single day I want to be happy. I want to take a few minutes every day to appreciate the things around me and what I’ve been blessed to have. I want to remember that though there could be rough times ahead that life is awesome.

8. Win a fantasy football championship. We’ll just have to see how this one goes.

5 thoughts on “She’s Going the Distance”